Times of trouble bring out…

.. the best and the worst in people. Or, it can grow one’s faith in God. I don’t know about other places around the country, but here, we’ve seen shortages, not just in the cleaning products, masks, and gloves, but also paper products, toilet paper, paper towels, and flushable wipes. Granted, times such as these lead to shortages, but I am still curious as to what led to the run on toilet paper.

Panic? Fear? Hoarding? Resell? It’s slowed down some, but only because retailers (HEB, Walmart, Sams…etc.) have put purchase limits on certain items.

For me, this weekend has been one of reflection. This past week I heard /read a lot about what Christians should be doing at this time, or should Christians fear the times. Is this the end times? And at church service this morning a gentleman shared a little story. It was like in Job, a parable.

Satan was present before God.
God was laying down the rules for this pandemic.  Lord, “What are you willing to give up?” Satan, “I will shut down the bars and the casinos, but only if You will agree to close the doors of the churches. God agreed. Of course, God knows the church buildings is not the church. And Satan might feel like he just won the battle. I was like, hmm… that’s interesting. And I remembered Job and the Tower of Babel and God willing to save two cities ten righteous people.

First, remember the Tower of Babel from Genesis 11? This was after the flood where God destroyed everything He had created, except for Noah and his family. So, the earth was filled with the generations of Noah. The whole earth had one language and one speech. Now, here they find a plain in the land of Shinar, and they dwelt there.

Then they said to one another, “Come, let us make bricks and bake  them thoroughly. Come, let us build ourselves a city, and a tower whose top is in the heavens; let us make a name for ourselves, lest we be scattered abroad over the face of the whole earth.”

And the Lord said, “Indeed the people are one and they all have one language, and this is what they begin to do; now nothing that they propose to do will be withheld from them. Come, let Us go down and there confuse their language, that they may not understand one another’s speech.”

Now, remember Sodom and Gomorrah?
The Lord said “Shall I hide from Abraham what I am doing, since Abraham shall surely become a great and mighty nations, and all the nations of the earth shall be blessed in him?

Now, remember Job 1? Job was a blameless man living in the land of Uz. He was an upright man and one who feared God and shunned evil. Job was extremely wealthy, the greatest of all the people of the east. And his children liked to party – so much so, that when the party was over, Job was in the habit of praying for his children. He thought, “It many be that my sons have sinned and cursed God in their hearts. And you know what happened next.

Yup. The sons of God and Satan presented themselves before the Lord.

The Lord said to Satan, “From where do you come?”
And he answered: “From going to and fro on the earth, and from walking back and forth on it.”
Lord: “Have you considered My servant Job, that there is none like him on the earth, a blameless and upright man, one who fears God and shuns evil?
Satan: “Does Job fear God for nothing? Have You not made a hedge around him, around his household and around all that he has on every side? You have blessed the work of his hands, and his possessions have increased in the land. But now, stretch out Your hand and touch all that he has, and he will surely curse You to Your face!”
Lord: “Behold all that he has is in your power; only do not lay a hand on his person.”

I have been reading and hearing of COVID-19 patients and survivors of those that have succumbed to the virus warning Americans to take this virus seriously. As if, Americans were not doing all they could to prevent the spread. Yes, in all situations we have people that go rogue. We have people that test God. Still, when we’ve done all we can, all we have been asked to do, it’s all we can do. God remains in control.

Well, did you know that the sons of God and Satan went back up to present himself to God. God asked him the same questions.

Then the Lord said to Satan, “Have you considered My servant Job, that there is none like him on the earth, a blameless and upright man, one who fears God and shuns evil? And still he holds fast to his integrity, although you incited Me against him, to destroy him without cause.”

So Satan answered the Lord and said, “Skin for skin! Yes, all that a man has he will give for his life. But stretch out Your hand now, and touch his bone and his flesh, and he will surely curse You to Your face!”

And the Lord said to Satan, “Behold, he is in your hand, but spare his life.”

He suffered physically. He lost his wealth, He lost his children. His friends judged him and accused him of unconfessed sin. Even his wife, told him to give it up, curse God and die (Job 2:9). And that’s what Job wanted to do, DIE (Job 6:8; Job 3:1-14).

If you recall, even Elijah was afraid and he wanted to die. Jonah, and even Paul had times where death was better than living. If you have never experienced pain or suffering, of course you might see the COVID-19 as the plague, or God’s wrath against a sinful people. This is a country that has experienced tremendous change in the last 60 years. And through most it, Americans have responded in fear. Many Americans have rejected some of the changes. Whether racial, technological, or whatever, change is seldom joyfully embraced.

“Naked I came from my mother’s womb, and naked I shall I return there. The Lord gave, and the Lord has taken away; blessed be the name of the Lord.”

We take shelter in times of trouble, but when the air clears, our emotions may still be on high alert, we may be on our best behavior, but it’s only a matter of time, before we go back to old habits.

Well, on that note, Americans…oh what a fickle people we are. We love all the latest and greatest trends. There’s this thing called marketing that keeps us updated on all the new products, new places to see and visit… you know what I’m talking about. Even if we have a perfectly fine phone, we have to rush out and get the latest model.

I learned a very valuable lesson about American attitudes. I lived in Germany for three years, as an army wife. I know I’ve written before about my experiences living in Germany from 88-92. I realized then, that we are a very blessed people, but also very arrogant. There is not much that we do not have access to, the good and the bad. All of us represent the best and the worst of what America represents.

Many people dig into a treasure trove of decades and centuries of publications on this Christian walk of ours. When I visit old bookstores, I can’t believe how much has been written to help Christians understand their walk with Christ. 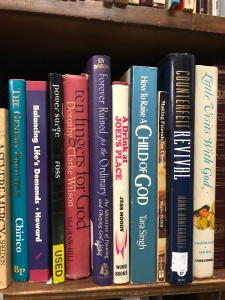 Anyway, people have been making predictions forever and a day, about such a time as this. They are not new predictions. No one has been given special insight into what we are experiencing today, that wasn’t first described by Jesus over 2000 years ago (Matthew 24). That New York and other large metropolises are dealing with the worst of this virus, is because of the sheer size of those communities, does that mean that smaller cities will not be infected? Clearly, not.

Matthew 16:1-4 “Then the Pharisees and Sadducees came, and testing Him asked that He would show them a sign from heaven. He answered and said to them, “When it is evening you say, ‘It will be fair weather, for the sky is red’; and in the morning, ‘It will be foul weather today, for the sky is red and threatening.’ Hypocrites! You know how to discern the face of the sky, but you cannot discern the signs of the times. A wicked and adulterous generation seeks after a sign, and no sign shall be given to it except the sign of the prophet Jonah.” And He left them and departed.

Matthew 24:3-8 “Now as He sat on the Mount of Olives, the disciples came to Him privately, saying, “Tell us, when will these things be? And what will be the sign of Your coming, and of the end of the age?” And Jesus answered and said to them: “Take heed that no one deceives you. For many will come in My name, saying, ‘I am the Christ,’ and will deceive many. And you will hear of wars and rumors of wars. See that you are not troubled; for all these things must come to pass, but the end is not yet. For nation will rise against nation, and kingdom against kingdom. And there will be famines, pestilences, and earthquakes in various places. All these are the beginning of sorrows.

Times of trouble test us all.

John 10:29 “My Father, who has given them to Me, is greater than all; and no one is able to snatch them out of My Father’s hand.”

"Obey those who rule over you, and be submissive, for they watch out for your souls, as those who must give account. Let them do so with joy and not with grief, for that would be unprofitable for you. Hebrews 13:17"

"And He said, “What comes out of a man, that defiles a man. For from within, out of the heart of men, proceed evil thoughts, adulteries, fornications, murders, thefts, covetousness, wickedness, deceit, lewdness, an evil eye, blasphemy, pride, foolishness. All these evil things come from within and defile a man (Mark 7:20-23).”

"If you then, being evil, know how to give good gifts to your children, how much more will your Father who is in heaven give good things to those who ask Him (Matthew 7:11)!"