Unprecedented times – call on everyone

Today, I wanted to share some about me. First, I have been a believer for over 30 years. I was 21 years old when I was first introduced to Jesus Christ. I was taught what some believers refer to as meat – the meat of the word of God. I was fed very little milk. And as you might know, newborn babies drink and need a lot of milk. Well, so I did learn about the many things that encompass the things of God – of which really one never stops learning. And I, honestly, wasn’t even aware of it. I was lead to conferences, listened to all the then popular bible teachers and so on.

But anyway. I met a man. We dated for a few short months and decided to get married. Well, in ten years of marriage we had five typical years, arguing, and raising children. It’s normal. Because I wanted out – I was told all couples argue, that was not a reason for divorce. And that was not what Christians do. God hates divorce. The next five years were filled with strife. It was not pretty, at all. The details are not necessary but one evening, my ex and I were arguing over something, then he suddenly confesses that during our entire marriage he had been miserable. And I was to blame for his misery. He confessed so much, that the more he confessed, the smaller I felt. And you know what? He called himself a Christian. We attended church. We fellowshipped with other believers. I had no idea that he felt that way. I was living with a complete stranger.

So, who are they that were encouraging me to stick it out, fellow believers. But I must confess that it was those same believers that warned me not to marry so quickly. We were both new Christians. But, my ex had only recently converted when we met. Did I listen. Of course not. We (I) were following our heart.

Although, God never left me alone, that did not prevent the difficult times. He was there with me through every dark moment in my life. He was there during those moments of DV, multiple infidelities, fear, threats, divorce, single-parenting, teen pregnancy, unemployment, rejection, self-condemnation, illness, and injury, uncertainty; the list is long. The Lord was faithful in never leaving me to myself. Yes, because many times i was my own worst enemy. Some of God’s promises have only recently been manifest. So, I can without a shadow of doubt, agree that trusting God in the dark moments, is probably the most difficult thing God will ask us to do. You recall Jesus, saying in Matthew 11:28-30
“Come to me, all you who are weary and burdened, and I will give you rest. Take my yoke upon you and learn from me, for I am gentle and humble in heart, and you will find rest for your souls. For my yoke is easy and my burden is light.”

Like Rich Mullins sang “Surrender don’t come natural to me, I’d rather fight you for something I don’t really want, than to take what you give that I need and I’ve beat my head against so many walls…”

It’s easy to trust God when all is good. When you have money, resources, friends and family for support  – who are willing to help you in your hour of need. I was reading in I John 3:17 “But whoever has this world’s goods, and sees his brother in need, how does the love of God abide in him?

So, back to the milk of the word. There is a time that believers need to feed on milk. The prophet Samuel trained from the time he was a child. And still, he did not recognize the voice of God. Where do we learn faith? How do we learn to trust in God, if not through the difficult times. Remember the fiery furnace, the belly of the whale, the lion’s den? Of course you don’t. You weren’t there and probably never will be. But where were you when you learned to trust God? Me? At the point of surrender. I wrote a little book I called, Imagine God in the Clouds. In it I recorded how God worked in my life to get me to learn my identity in Christ. I had to go back to basics to learn it and to learn the love of God. Who am I that God should think of me, that He knows me by name? 1 John 3:1 “Behold what manner of love the Father has bestowed on us, that we should be called children of God!”

Here recently, we’ve heard it from just about everyone on the airwaves…”These are unprecedented times.” And most would agree. But I say consider this. If we look at biblical times, remember when God struck down the first born of Eypgt? Can you imagine how mother’s and father’s felt seeing their firstborn just drop dead? Age did not matter, only that they were firstborn. Do you think that the children of God felt no compassion?

God had warned His people of what He was going to do. And He told them what to do to protect themselves and that “None of you shall go out of the door of your house until morning. When the Lord goes through the land to strike down the Egyptians, he will see the blood on the top and sides of the doorframe and will pass over that doorway, and he will not permit the destroyer to enter your houses and strike you down.” Can you picture the joy of the mother that just gave birth to her first child – suddenly let out a deafening shriek?

Moses had pleaded with the Pharaoh to let God’s people go, but the guy would not relent. After a visit from the destroyer, he had a change of heart. Sound familiar? (The 10 Commandments is one of my favorite movies-great cinematography!) So… “During the night Pharaoh summoned Moses and Aaron and said, “Up! Leave my people, you and the Israelites! Go, worship the Lord as you have requested. Take your flocks and herds, as you have said, and go. And also bless me.”

We cannot imagine how it must have felt living through those times. And we know about those times because of certain men, chosen by God, lead by God to do all these great, amazing and sometimes harsh things. But the harshest thing in all the Bible was done by God Himself when He sacrificed His own Son. He did this for the people that He created, that had gone so far left – that the only way to bring them back to Himself was to offer up His only Son as the final sacrifice.

The times are unprecedented, perhaps – but no doubt God is reaching out to you and me to reveal Himself in our lives. But also, give opportunity to those that do not believe too, to turn to God, to see His glory. I for one, did not think it was possible to completely trust God. It’s refreshing. And I don’t mean trusting God like trampling over snakes and scorpians, but like in “Be still and know that I am God.” Every believer is charged with the mission to spread the gospel.

Our influence may be minor compared to that of others, but no less important. For sure, our influence is greater outside the church walls. If we hold to the notion that the lost are outside the walls. God calls people to Himself. And His own hear His voice. I’ve been asking God, in these unprecedented times, what is my role? To share the gospel by sharing my experiences in my encounters with the living God. 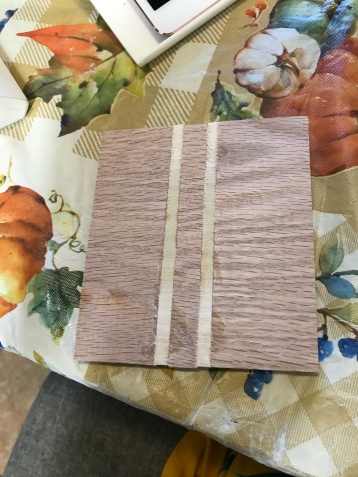 My husband is making wood coasters. They take a lot of work. 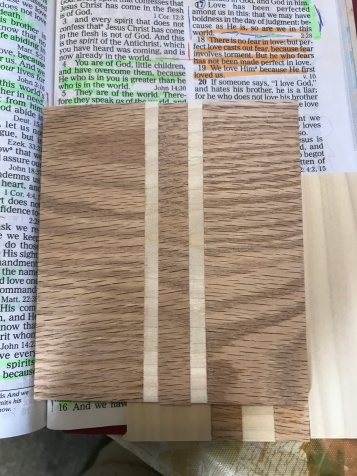 Cutting, shaping, gluing, sanding… what it looks like at the end is determine by the crafter.

Check out my books on Amazon. Kindle version on sale now!

“For God so loved the world that He gave His only begotten Son, that whoever believes in Him should not perish but have everlasting life. For God did not send His Son into the world to condemn the world, but that the world through Him might be saved. “He who believes in Him is not condemned; but he who does not believe is condemned already, because he has not believed in the name of the only begotten Son of God. And this is the condemnation, that the light has come into the world, and men loved darkness rather than light, because their deeds were evil.” John 3:16-19

“Not everyone who says to Me, ‘Lord, Lord,’ shall enter the kingdom of heaven, but he who does the will of My Father in heaven. Many will say to Me in that day, ‘Lord, Lord, have we not prophesied in Your name, cast out demons in Your name, and done many wonders in Your name?’ And then I will declare to them, ‘I never knew you; depart from Me, you who practice lawlessness!’ Matthew 7:21-23